Your car's steering and suspension system contains several different parts, but among the most overlooked are the dust boots that cover the end of the tie rods. These small, flexible parts may not look like much, but they're integral to keeping your car steering smoothly.

Tie rod boots are also one of the easiest car parts to replace. If you're even slightly mechanically inclined, you should have no trouble replacing your own boots. Here's what you need to know about tie rod end dust boot replacement and when you might need to do it. 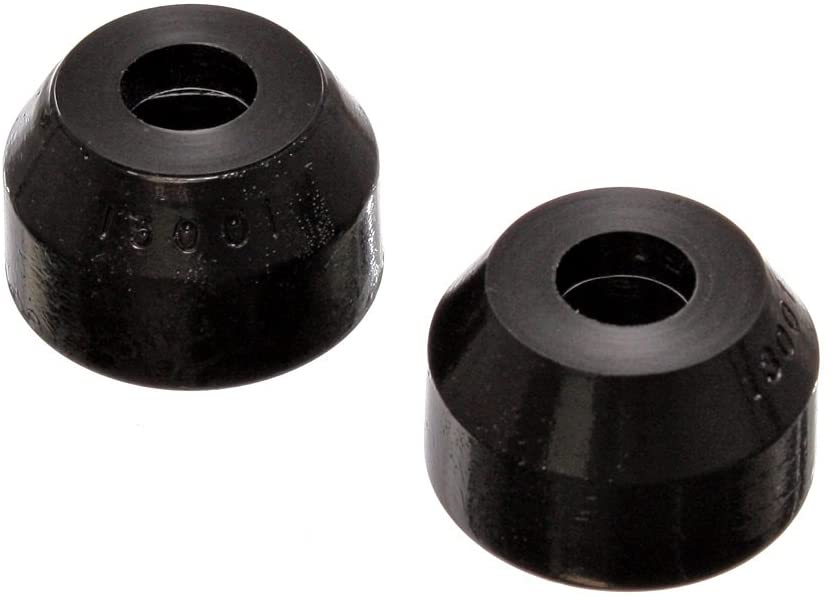 The most common symptom of a bad tie rod boot is a high-pitched squeaking or squealing during turns. When the boot cracks or is damaged, the lubricant inside the tie rod end can escape. When the ball joint turns without proper lubrication, it makes a distinctively unpleasant noise.

Other symptoms associated with a bad boot include poor front end alignment, uneven tire wear and clunking noises while you're driving down the road. Be careful, though, as these issues aren't unique to a bad dust boot and can be caused by other problems with the tie rod assembly.

If you suspect that you have a bad boot, a simple visual inspection should be enough to see whether or not that's the problem. Remove the tire and look for the black rubber boot covering the ball joint. If you see tears, holes or find that the boot has split, you need to replace it as soon as possible. 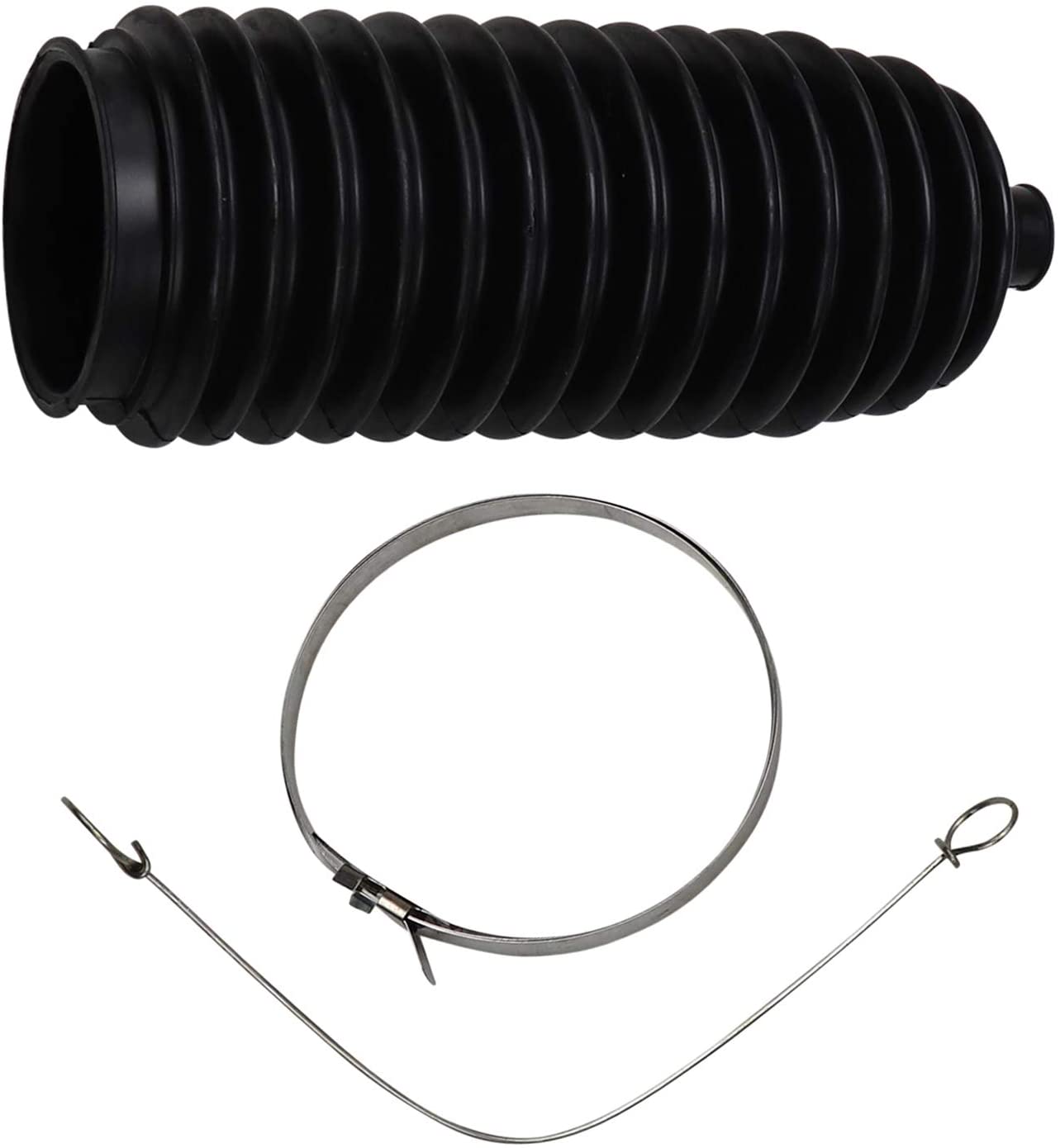 In addition to the small boots you'll find on your outer tie rod ends, there's a larger, bellows-style boot that sits at the end of the inner tie rod assembly. As you can see in this video, the bellows boot is both larger and harder to access than the outer tie rod boot. In order to get to it, you'll need to remove the outer tie rod. However, replacing this bellows boot is still something most DIY mechanics can manage without too much difficulty.

If your bellows boot goes bad, you'll likely begin to experience steering problems. The inner bellows protects the joint where the inner tie rod end connects to your steering system. Luckily, on the larger bellows, it's fairly easy to see if there's a crack on a tear.

The bellows can also simply become dislodged over time, allowing dirt to get into the joint. This boot is held in place by a relatively small clamp. If the clamp loosens or breaks, it can cause problems similar to a damaged boot. In a pinch, you can replace this clamp by securing the bellows into place with cable ties. Be sure to apply fresh grease to the joint, as it will likely need new lubrication after the boot becomes dislodged.

Tie rod end boots naturally wear out over time. Most often, boots fail by tearing or cracking. As noted above, this allows the grease from inside the ball joint to leak out, which can lead to much larger problems if the boot isn't replaced. A torn boot can also allow water or debris from the road to get into the joint, potentially causing additional damage.

How Long Does it Take to Replace Tie Rod Ends?

If all you have to replace is the boot, the project can take as little as a few minutes per boot. This is because outer tie rod boots are easily accessible and don't require you to remove several other parts in order to replace them.

A professional mechanic can do a tie rod or tie rod end replacement in about an hour. If you're a reasonably handy DIYer, expect to spend between one and two hours per tie rod, plus some time for penetrating oil to make removing the parts easier.

Is a Tie Rod Expensive to Fix?

As car repairs go, tie rods aren't the worst. The parts themselves are relatively inexpensive, so replacing a tie rod end usually only costs a few hundred dollars. If you choose to do it yourself, the cost can be even lower. The cost, however, will vary depending on the make and model of your vehicle and the quality of the replacement part you're using.

The price of replacing tie rods does increase if you have to replace both the inner and outer rods. Likewise, you should expect to spend more if you're replacing both sets of tie rods.

How Much Does it Cost to Replace a Tie Rod End Boot?

If you only need to replace the boot, tie rod repair can be very cheap. Boots usually sell for $10 or less, and they can easily be replaced by a DIY mechanic with some basic skills. This makes a tie rod end dust boot replacement one of the least expensive auto repairs out there. You'll also need a bit of grease to lubricate the joint, but the cost of this is also fairly small.

Can You Replace Just the Boot on a Tie Rod?

As long as the boot is the only part that's damaged, you can replace the boot without replacing any other parts. If the tie rod end is damaged, however, you'll need to replace that as well. You will also have to apply new lubricant to the ball joint when you replace the boot.

How Do You Remove Outer Tie Rod Boots?

To remove the outer tie rod boot, start by removing your tire to gain access to the tie rod assembly. From there, you'll need to separate the tie rod end from the steering spindle. On most cars, a nut and a cotter pin connect the two. Remove these connectors, then use a tie rod separator to safely disconnect the two. The separator will allow you to direct the force of a hammer strike against the tie rod while also protecting it from damage.

Once the two are separated, you should have free and clear access to the boot and ball joint. For a good visual of what this looks like, check out this YouTube video, which clearly shows the tie rod end dust boot replacement process. From here, you can simply peel the cracked, old boot away and discard it.

How to Install Tie Rod End

If you have to replace the tie rod end itself, the project becomes a bit more in-depth, though it is still manageable. To begin, repeat the steps discussed above for separating the tie rod end from the spindle. Again, be sure to use a separator to protect the parts from damage.

Next, remove the nut that links the inner and outer tie rods together. The type of nut will depend on what kind of steering you have. In a rack and pinion steering system, you'll have a jam nut. On center link steering, a sleeve nut is used instead. Be sure to mark the position of the nut so that you'll know how far to thread the new tie rod end onto the inner tie rod. Then, remove the old tie rod end.

With the old tie rod removed, thread the new tie rod end onto the inner tie rod. To minimize alignment adjustments, be sure to thread it on as closely as possible to where the old rod end was. Once you have done this, you can put a new boot on and reinstall the nut and cotter pin that hold the tie rod end onto the spindle. Torque the nut back down to manufacturer specifications using a torque wrench to ensure safe steering.

Once the new tie rod end is installed, you'll need to reinstall your wheel and carefully test your steering. Be sure that there is no extra play in your steering and that the wheel moves freely. Make adjustments as necessary, then take your vehicle in to have the wheels professionally aligned.

How Do You Seal Tie Rod Boots?

In some cases, the old boot may only have a small hole or a very minor tear in it. If this is the case, you may be able to seal the boot without removing or replacing it. To do this, you'll need a grease needle and a flexible sealant tape. Begin by injecting grease into the joint with the grease needle, using the hole or tear in the boot as an access point. This will allow you to lubricate the joint without removing the tie rod end or the boot.

Next, you'll need to seal up the hole. To do this, cut a piece of the sealant tape a bit longer than one foot. Wrap the tape around the boot, being sure to pull it taut so that it takes on the contours of the boot underneath. Wrap it around a few times to get a firm, tight seal. To improve adhesion, you should clean the boot before you begin to remove dust and debris. For a better visual representation of this process, check out this YouTube video.

Note that not all damaged boots can be repaired this way. If you have a large tear, the tape solution won't seal it up well enough to fix the problem. Resealing a boot is only a good idea when the damage is relatively minor.

Do You Need an Alignment After Replacing Tie Rods?

What Should a Tie Rod End Boot Look Like After Replacement?

After being replaced, your tie rod end boot should bulge out slightly between the tie rod and the spindle. It should be centered between the two and not incline to either side. If you have sealed a damaged boot, the tape should be tightly wound around it and there should not be excess that could catch on nearby moving parts.

What Is a Tie Rod Dust Boot?

A tie rod dust boot is a small, flexible rubber covering that fits over the ball joint on your vehicle's steering spindle where it meets the tie rod end. The purpose of the boot is to protect the joint from water, dust and road debris. The boot also holds the grease that lubricates the joint in.

What Are Dust Boots Made From?

Most dust boots are made from flexible rubber, allowing them to bend under the weight of the vehicle without breaking. Some, especially aftermarket boots, are made from polyurethane. Either material will accomplish the basic task of sealing grease in and keeping debris out.

How Are Tie Rod Boots Measured?

Most tie rod boots are measured in inches. If you're unsure of what boot to use, there are several universal boot options that will fit most vehicles. You can also measure the old boot from your vehicle to determine the proper size.

Receive our latest updates about new products and promotions.

We promise to only send you good things